“Entrepreneur of the Year 2010” competition 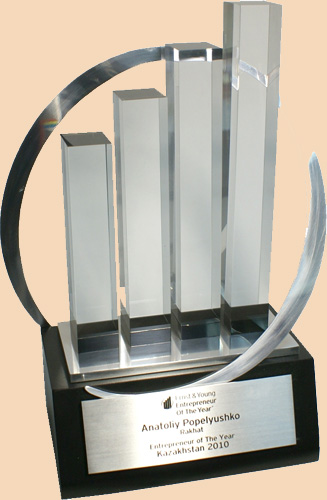 The main goal of the «Entrepreneur of the Year» competition is to draw the attention of society on importance of entrepreneurship to economy and to present these vivid entrepreneurs of considerable talent, who deservedly can be the example for next generations.

Award ceremony of …Winners of the «Entrepreneur of the Year» competition are distinguished persons, who could create world-class companies, and who are able to compete with top entrepreneurs from other countries on equal terms. Quantitative measures, such as dynamics of increase in company’s turnover, growth of profit, increase in workplaces, and qualitative measures, such as innovation degree in business practice, developing of original products, creative solutions in the field of marketing and sale, degree of development of national and international markets, acceleration of employee development program, are the criteria the election of winners.

By the decision of independent jury

Chairman of the Board, Member of the board of directors and President of “Rakhat” JSC,

became the winner of national stage of the «Entrepreneur of the Year» competition in Kazakhstan and was awarded with main title of competition.

He became the winner of “Leader of consumer market” nomination as well.

Anatoliy Viskhanovich will represent Kazakhstan on international stage of competition in June of this year in Monte Carlo, Monaco.

Lotte Rakhat Company and the ArtFuture platform opened the doors of the Art Residence as part of the Qazaqstan Oneri project to support modern art in Kazakhstan.

Lotte Rakhat Company and the ArtFuture platform opened the doors of the Art Residence as part of the Qazaqstan Oneri project to support modern art in Kazakhstan. For two months, from October 1 to November 29, Kazakhstani modern painters held…