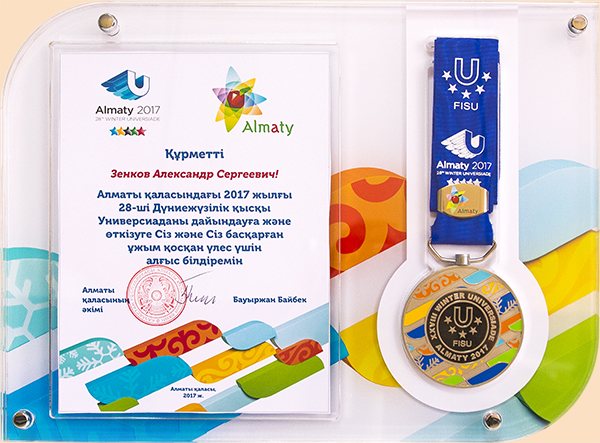 Akimat of Almaty city, represented by the akim of the Almaty city Bauyrzhan Baibek presented a certificate of gratitude “Rakhat” JSC and all other partners, for contributing to the organization and holding of the 28th World Winter Universiade – 2017!
For us it was a great pleasure to be among the partners and become part of such a large and important event for the city of Almaty and all Kazakhstan, as the World Winter Universiade – 2017.

“Rakhat” JSC provided as sponsorship of more than 8.5 tons of chocolate, biscuits and waffles for the participants and guests of the Universiade. It is worth noting that more than 2 tons of confectionery products were intended for meals of participants of the Universiade-2017 in the Athletes’ village and sports objects of the Universiade, as well as refreshments at officialevents, conferences and etc.
Logo of International Winter University Games in Almaty has been placed on the packaging of chocolate “Kazakhstan” and biscuits “To your health”.
During the competition“Rakhat” JSC organized a sales point in the Athletes’ village. A wide range of sweets was very popular and allowed athletes from the different countries to buy our sweets and take home as a souvenir.

We thanked akimat of Almaty city and the Directorate for preparation and holding of the 28th World Winter Universiade – 2017 for expressed their trust and recognition!